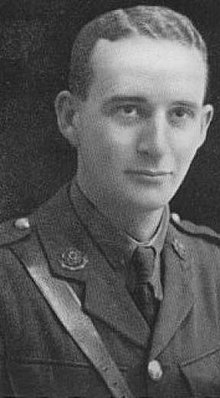 Basil Horsfall was born on 4 October 1887, the youngest son of Mr W

F Horsfall, in Colombo, Ceylon (now Sri Lanka). He was educated in Ceylon and at Sir William Borlase’s Grammar School, Marlow, in England, after which he returned to Ceylon where he is reported as working variously as a rubber planter, an accountant, and a civil servant in the Public Works Department.

He was a member of the Ceylon Engineers, a locally-raised force of European expatriates largely drawn from the Public Works Department which was mobilised for the duration of World War I. In July 1916, aged 28, he returned to Britain where he was gazetted as a 2nd Lieutenant in the 1st Battalion, East Lancashire Regiment, on 19 December 1916.

Basil was wounded on 11 May 1917 while serving with the 1st Battalion and after recovery and convalescence in England  was attached to the 11th (Service)Battalion, East Lancashire Regiment (the Accrington Pals) on 24 October 1917.

On 27 March 1918 the Pals came under a very heavy attack as the Germans attempted to capture the village of Ayette, south of Arras. The Germans stormed the Pals’ positions again and again, with each side suffering heavy casualties.

“In the action fought between Ablainzeville and Mayannaville on 26th and 27th March 1918, my Battalion (11th East Lancs.) was holding the ridge which runs between Ablainzeville and Mayannaville. My left was on the road which runs from Courcelles Le Comte Le Ayette. The enemy attacked very heavily on the dates mentioned. Your son was commanding the left platoon of my left company. The 11th East Lancs. prolonged the line towards Mayonnaville. The 11th East Lancs. were driven off the ridge but your son continued to hold to his position. I received a message from him saying that he had been driven back but that he was counterattacking which he most successfully did, driving the enemy back and gaining his objective. He being wounded severely (in the head) at the time. Hearing that the two other platoon commanders on the ridge were both killed and the other platoon commander wounded he refused to leave his men. Throughout the day a very heavy fight was continued. Twice your son lost his position but each time he counterattacked, driving the enemy back. He held his ground though his Company had lost 135 out of 180 engaged. In the evening when both my flanks were driven in on to my  headquarters, I sent written instructions to your son to retire on to the line of Ayette. He received the instructions and carried them out, himself remaining behind to supervise the retirement. During the retirement he was unfortunately killed close to the ridge which he had so gallantly held for two days. His body had to be left where he fell, and the ridge

has been in the possession of the Germans ever since. By his splendid example and devotion to duty undoubtedly a very critical situation was saved.”

“The order to retire came. Before we set off, 2/Lt Horsfall shouted ‘every man for himself’. Terrible words but a terrible situation to be in.

“2/Lt Horsfall was on my left as we started to cross an old airfield but 20 yards after we started he simply wasn’t there. Our company lost about 25 men crossing that airfield. There were five of us in my party and two didn’t make it. Of all the time I spent in France that was a day I will never forget.”

Basil Horsfall’s body was never found. He is commemorated on the Arras Memorial.

His Victoria Cross is kept in the Museum, and is one of our proudest possessions