IN MEMORY: family stories and remembrance

Studied to be an Archeologist

Nov. 1, 1915 – Discharged from Royal Army Medical Core having been granted Commission as a 2nd Lieutenant in the 2nd Battalion, Royal Fusiliers.

Many shrapnel holes in his back, back of legs and behind his ears

Only story he told his family was that a friend of his was standing in the next area singing "Onward Christian Soldiers" when a bomb went off. Leslie looked back at where his friend was and the only thing left were his hands on the ladder. From that day onwards Leslie never believed in God again.

Believe he joined the London Mounted Brigade as a driver before joining the Honorable Artillery Company.

June 28, 1920 – joined the Honorable Artillery Company as a driver

At: The Registry Office in Wandsworth, England

Also in the London Scottish at some point 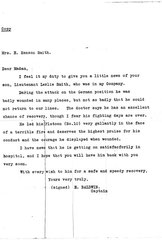 This is a poem written by Craig Michael Peattie of New Plymouth, New Zealand, dedicated to all members of the Somme Remembrance Association, inspired by your tribute to the memorial of our Great Uncle Samuel Cunningham, and our other forefathers, namely of the Reardon and Peattie families, who died in both World Wars:

Thoughts From The Grateful

To the people who tend the fields,

Generations apart from our fallen,

A family, a person who gives us heart,

Old tears wept for our forefathers,

Inherited, our memories of loss pass on,

For all those who sank into the depths,

Our thanks to the people of the Somme.

you wish to send a photo of a Memorial, a plaque, the storie of a family member during the Great War >  contact me !

philippe.drxaliceadsl.fr (copy this address and change the x for @ )